As far as dedicated macro glass goes, Laowa is quite an affordable all-manual lens for APS-C cameras from China. Whenever "China" and "affordable" appear in the same sentence, most people would think "not a very good piece of glass." I was pleasantly surprised to learn that it is anything but. Let me tell you all about it.

This is a review of the Laowa 65mm macro lens as used on the Fujifilm X-T3 and X-S10 bodies. This lens is available for the Sony E, Canon EF-M, and Nikon Z mount as well. It's the same glass, and just the mount is different.

Laowa is a Chinese optics maker also known as Venus Optics. According to the Laowa homepage, the company was formed by "a group of photography enthusiasts and industry experts" in 2013 (9 years ago as of this writing). It focuses primarily on producing optics in the focal lengths that are not covered by manufacturers. For example, it produced the widest prime for MFT (micro-four-thirds), the highest-magnification macro lens for APS-C, and so on. Most of the Laowa lenses have no electronic contacts, and all are fully manual. Their products are typically affordable. Even the $4000 cine lens is quite affordable compared to five-digit lenses from Fujifilm, for example.

The price (is right)

Normally, I like to avoid talking about price too much, especially under a separate heading. The same price is expensive for some people, and cheap for others.

Laowa 65mm is an exception. The price simply has to be mentioned. To put the Laowa's $400 price tag into perspective, among the Fujifilm X-mount lenses, Fufjifilm's own XF 60mm F2.4 R macro lens goes for $650 (62% more expensive) and only focuses down to 1:2 (0.5) magnification. The true 1:1 magnification XF 80mm F2.8 R LM WR OIS goes for $1,200 (3 times the price) but it's so heavy that I've never considered getting it even when I could. Zeiss Touit 2.8/50M is $850 (more than double the price) but it's only 50mm, which is too short for me. All these lenses are autofocus lenses, and the 80mm has weather-sealing and OIS to boot. If you absolutely need those features, sure, the choice is clearer. However, in terms of magnification, and raw image and build quality, there is no clear-cut advantage in paying the premium.

The missing features of the Laowa 65mm, in my opinion, simply do not add up to the sheer price difference, and it is still able to offer features that others do not! In other words, it's not just a cheaper version of the other lenses. It's a remarkable value proposition.

Today, even the top manufacturers offer lenses costing upwards of a $1,000 made of all plastic. The Chinese have obviously noticed photographers love tough metal lenses and they decided to deliver.

Laowa 65mm is a tough little lens, built out of all metal, except for the lens hood mount. Even the lens hood is metal, and included in the box. The said lens hood mount sort of broke after two uses for me (the hood stopped clicking into place, although it is still usable).

The focus ring is buttery smooth. The aperture ring has nice light clicks to it. All moving parts operate without any screeches or clunks, as they should.

Everything about this lens (except for the price tag) says 'premium.'

Personally I think asking for weather sealing at this price point is asking too much, but yeah, it's not weather sealed so if you plan on shooting in the adverse weather, this is not for you.

The lens is 9.5cm (3.74in) in length. In other words, it's quite short. The most amazing part, though, is the outer diameter of the lens. Its outer diameter is only 55mm. This means that it does not block that much light compared to the usual fatter variety of macro glass.

The lens is also light. Despite its all-metal construction, the lens is only 318g (11.2oz) in weight. In terms of soda bottles, this is two thirds of the weight of a full half-liter soda bottle. It is well-balanced even on more compact bodies like the Fujifilm X-S10 and the setup won't nose-dive on you. Of course, it's perfectly balanced on heavier bodies like the X-T3. It makes one-handed shooting a joy (well, as much as it can be on ergonomically challenged Fujifilm cameras).

The lens has a rather long focus throw, which makes manual focusing at macro distances very precise. Because of it's superior micro-contrast, focus peaking works great with this lens, too. On Fujifilm, the lens has no electronic contacts for aperture control, so you always focus at the aperture set on the lens. Despite this, it is easy to focus with this lens even at F8.

When shooting with one hand, the focus ring is not easy to turn with one finger, but it's possible.

The lens focuses internally, and nothing on the outside turns as it does (except for the focus ring, obviously). This makes it suitable for attaching polarizers to the 52mm filter thread.

The stops on the aperture ring are not evenly spaced. This apparently throws off some photographers. Personally I did not notice much difference between using this and other lenses. I never go over F8, and spacing up to F8 is generous enough. The steps become very short past F8, though.

The focus scale has markings for magnification (reproduction ratio) in addition to the focus distance. Once you get a feel for the distances and fields of view you get at different magnification, the magnification scale comes in very handy for placing the focus at around the correct spot before even bringing the viewfinder to the eye.

Perhaps the only downside of this lens' ergonomics is the focus breathing which is quite pronounced at macro distances. A small shift in focus distance can result in a big shift in the framing. It takes a bit of practice to deal with this, but a combination of both body movement and focus ring action can be used to counter the focus breathing.

Because it's all metal, the lens is super-cold to touch in winter time.

This lens goes all the way to 2× life-size magnification. An object as narrow as 11.7mm (0.46in) will fill the width of the frame. This gives an equivalent field of view of just over 3× magnification on a full-frame sensor, mind you.

The lens does lose 2 stops of light at 2× magnification, though, which may or may not affect your lighting set-up. For example, I use the Godox V1 which is powerful enough to light up the subject even with the 2-stop handicap, but I need to keep the flash just a few centimeters from the subject at full blast due to my shooting style (dark background).

Working distance is rather short at maximum magnification at around 6cm (2.3in). At 1:1 magnification, the working distance is still short: just under 8cm (3.14in). Although the slim profile of the lens makes this ok (blocks less light) for static subjects, many insects will not tolerate such proximity. Having said that, I've seen plenty of insect photos made with this lens, and I've shot some myself at 2:1 magnification, so it is doable.

This lens is pure optical perfection. If you can't get excellent results from this lens, it's either a dodgy copy or your skills. It makes me happy every time I manage to nail focus. The amount of detail this piece of glass can capture is simply mind-blowing.

The clarity of the image is aided by virtually complete lack of chromatic aberrations (as shot on Fujifilm X series cameras), thanks to the presence of apochromatic and ED elements in the lens' optical formula.

On the Fujifilm cameras, this lens demonstrates peak sharpness at F8, although it's very sharp at any setting wider than that. At F11 and beyond, the sharpness is diffraction-limited (or, in plain English, degrades a little) just like any other lens. This is a limitation of camera lenses generally, and not because of this lens' design.

The lens readily flares if the light is anywhere near the frame. The flare is of the usual variety, casting a light haze over the entire frame.

I find that the flaring is not that bad in general use, and because it is able to flare when the light is outside the frame, I sometimes use this as a lighting effect. In the following image, the flare created an almost cinematic appearance.

The 9 straight aperture blades produce a creamy and pleasing bokeh. The transition from sharp to unsharp area is not as smooth as some of the vintage lenses I've tried, but it's gradual enough to not be too distracting. The following image was taken at F8.

The bokeh balls are irregular in shape but not distracting.

In out-of-focus areas with higher contrast, I sometimes observe sharp lines. This may be distracting, but it does not happen that often. The only problem is that it's usually difficult to spot at low magnification in the viewfinder or on the LCD.

Laowa 65mm F2.8 2x Ultra Macro has a lot going for it. Even if it were twice as expensive, you would still be hard-pressed to find a lens which performs as well optically while offering 2:1 magnification.

The things you may want to keep in mind when considering this lens:

The positives of this lens more than make up for the shortcomings, though, including:

NOTE: If you spot any lack of sharpness in the sample images, it's entirely due to my skills, and no fault of the Laowa 65mm. 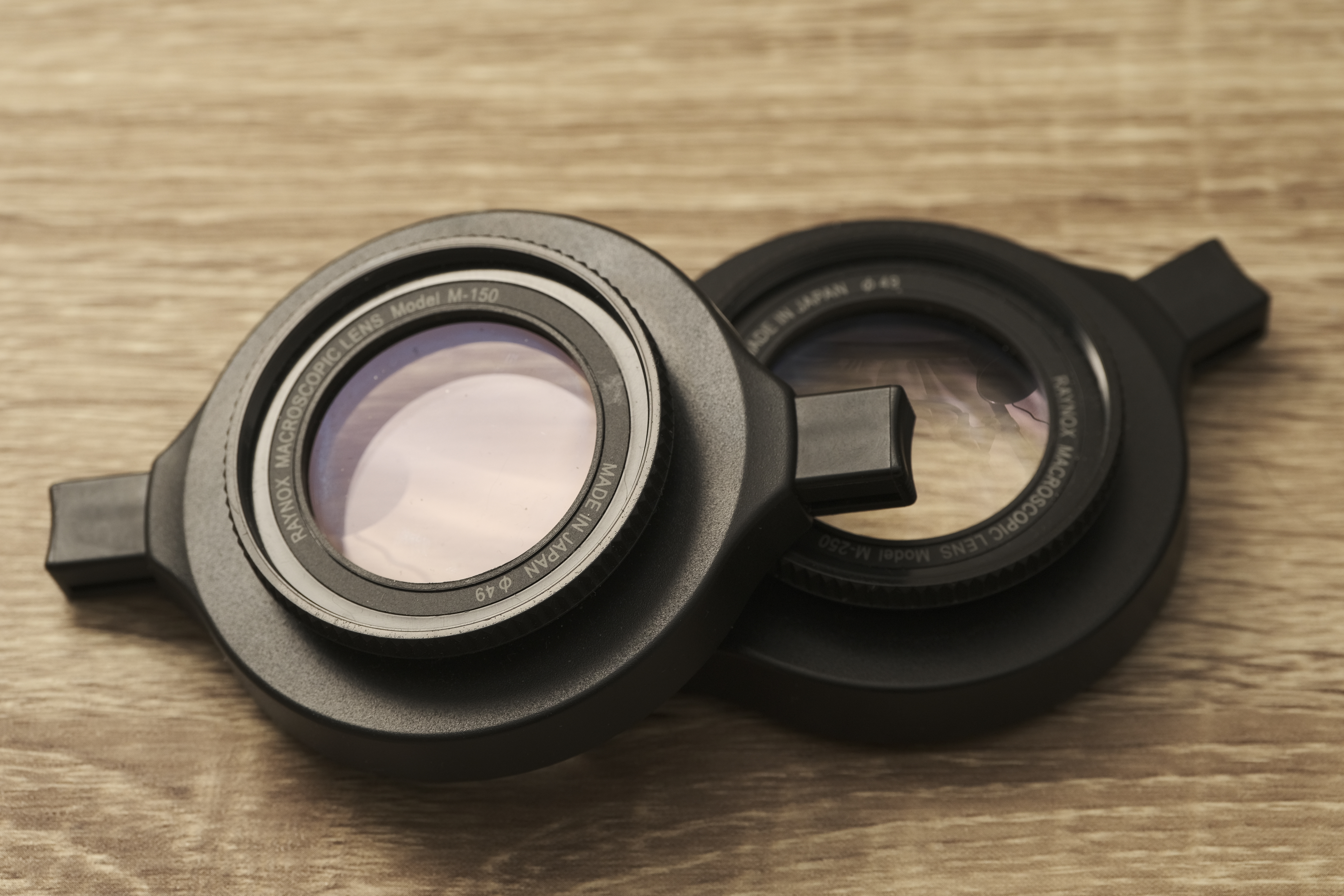 Raynox has made its name among macro photographers with their excellent DCR-150 and DCR-250 diopter lenses. While the diopter lenses are generally the easiest and most convenient way to convert a non-macro lens into a macro lens, their optical quality is typically not that great. Raynox is an exception. In this post, we'll take a look at both the DCR-150 and DCR-250 diopters, and see how they are used and what kind of results they yield.